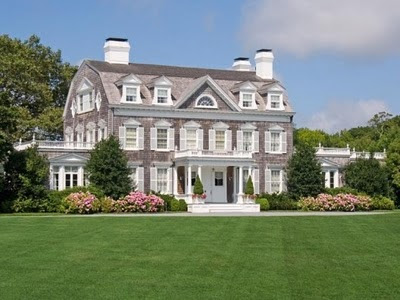 Claverack, the $35 million Southampton estate belonging to Anne Eisenhower(yes, like the president!) has finally found a buyer. Sotheby's Harald Grant, who's listed the property for years now, "confirmed" to the WSJ "that the three-story house ... was in contract and due to close before the end of the year." Sadly, Grant stayed mum about the price, but most brokers still think it'll rank as one of the top sales of the year. And seeing how Eisenhower paid only $5 million for the place in the '90s, she stands to profit no matter what. In other news, if all this talk about Eisenhower has left you wanting more history, take a look at this post, which shows how Claverack has changed over the years
by Ian Ratner,Curbed
----------------------------------------------------------------------------------------------------------------------------------
A historic 19th-century Southampton mansion owned by Anne Eisenhower, a granddaughter of the former president, has found a buyer, brokers said, in one of the most significant sales of the year in the Hamptons.
The 12,000-square-foot house has been on and off the market for the past few years, brokers said, with a recent asking price of $35 million. Even not knowing the final price, brokers said it would likely rank as the second or third highest sale of the year in the Hamptons.
Ms. Eisenhower is a socialite active in many charity events as well as an interior designer. One East End broker said that Ms. Eisenhower has been looking for a smaller, easier-to-manage home in the Hamptons.
Property tax records show that she owns the mansion with her husband, Wolfgang Flottl, an investment banker and art collector. He was convicted in Austria in 2008 on charges he played a role in covering up investment losses at an Austrian bank linked to the failure of Refco, a New York financial-services firm. An appeal is pending.
Ms. Eisenhower was said to be traveling, and didn't respond to several messages left at her New York office.
The house, originally known as Claverack, was built in the 1890s and was one the first oversized "cottages" of the original summer colony that sprang up in what is known as the estates section in Southampton Village. The house was modeled after a Dutch colonial mansion, with dormer windows and a peaked roof, that was built near Albany in the 18th century for a member of the Van Rensselaer family, one of the original families to settle in the Hudson River Valley.
The wife of the original owner was a descendent and gave the house its Dutch name. A later owner Americanized it and renamed it Keewaydin, the northwest wind in the poem "The Song of Hiawatha" by Longfellow. "It is one of the greatest houses of the original summer colony," said Gary Lawrance, an architect and author of a book on houses in the Hamptons.
The house was originally part of a 30-acre estate, Mr. Lawrance said, with gardens designed by the Olmstead brothers, but all but 10 acres have been sold off. Now brokers said part of the grounds could be sold off again, for two additional housing sites. The house is protected as part of a Southampton Village historic district, but years ago, the site was partitioned into three separate building lots.
Papers filed with Southampton Village in connection with the sale show that the buyers plan to take title to the property using two separate limited liability companies—one for the mansion, and the other for the other two potential building lots.
Ms. Eisenhower paid about $5 million for the property in the mid-1990s, during a market downturn, brokers said. The current deal shows how much values have risen in the Hamptons, even in properties far from the beach, despite the slump in prices and sales in recent years.
The highest price for a home in the Hamptons on a deal to close this year was the $43.5 million sale of a 6.5-acre estate in Sagaponack. The estate, with a 6,200-square-foot oceanfront home was sold by Joanne Corzine, the ex-wife of Jon Corzine, the former New Jersey governor and senator, to David Tepper, a hedge-fund manager.
By Josh Barbanel, wsj.com