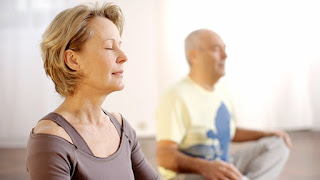 Relax Your Stress Away! 11 Ways To De-Stress Relax Your Stress Away  11 Ways to De-Stress  Your shoulders are tense, your back hurts, you feel grouchy and know it’s due to stress. The relaxation techniques described below can help relieve both the physical and emotional tension that often follows stressful situations. Relax Your Body  The next time you feel the effects of too much stress, try some of the following ways to help you relax. 1. Deep breathing. While sitting, lying down or standing, close your eyes and breathe in slowly. Let the breath out for a count of 5–10 seconds. Perform ten of these super-relaxers any time you feel tense. 2. Stretching. Practice simple stretches such as the “neck stretch” – gently roll your head in a half circle, starting at one side, then dropping your chin to your chest, then to the other side. 3. Exercise. All kinds of physical activity – hiking, running, bowling, walking, etc. – help to reduce stress. 4. Take a bath. Ask hous
Post a Comment
Read more

Fourth Quarter Market Report – 2016 Despite a 13% decline in the number of sales, the average Manhattan apartment price reached a record $2,110,556 in the fourth quarter. This figure was 9% higher than a year ago, and up slightly from the previous record set in 2016’s first quarter. The median apartment price of $1,075,000 was down 4% from 2015’s fourth quarter. Cooperative Average Sales Price Cooperative apartment prices averaged $1,242,916, a 3% decline over the past year. Only studio co-ops posted a higher average price than in the fourth quarter of 2015. Condominium Average Sales Price New developments continued to push condo prices to record highs in the fourth quarter. At $3,143,441, the average condo price was 22% higher than a year ago, and marked the second straight quarter this figure was over $3 million. Three-bedroom and larger condo prices averaged 27% more than a year ago, the biggest gain of any size category New Developments - Average and Median Sale
Post a Comment
Read more

January 10, 2017
Manhattan’s 2016 Narrative – 5 Main Themes to Know 2016, the year of normalization… After five straight years of progressive reflation in Manhattan residential real estate (2010-2015), buyers finally saw the leverage pendulum swing their way. Of course, just how much leverage a buyer gained still heavily depends on the price point. What’s happening at the high end is drastically different than what’s happening at the lower end. Lets discuss before the firms Q4 market reports are released. Here are the 5 themes you need to know about Manhattan’s 2016: Read more...
1 comment
Read more
More posts