Showing posts from April, 2012
Show all

First Quarter Report of Residential Sales in the City

Sales of homes and apartments in the first quarter showed little change from year-earlier levels. A spurt in buying in the Bronx and Queens was nearly totally offset by a lackluster sales in Manhattan and Brooklyn and a big drop in Staten Island, according to a new report. During the first quarter, there were 9,035 sales transactions in the five boroughs, compared with 8,999 in the first three months of 2011, according to the report compiled by the Real Estate Board of New York, or REBNY, a powerful industry trade group. Borough by borough, however, the picture varied widely. In Queens, the number of sales jumped 13% to 2,919, while the Bronx saw sales numbers surge 14% to 549. Meanwhile, the number of transactions barely budged in Manhattan, inching up by a mere 10 deals to 2,635, while in Brooklyn sales rose 4% to a total of 2,375. Only Staten Island, recorded a drop, a steep 44% fall to 557 sales. The report tracks closed sales of condos, co-ops and one- to three-family homes. “
Post a Comment
Read more

Sales up, prices down in Manhattan housing market

April 11, 2012
The number of Manhattan sales dropped 45 percent to 7,430 between 2007 and 2009, according to  The Real Deal’s  2010 Data Book (see the entire residential housing market history section from the Data Book below), but rose 8.4 percent between fourth-quarter 2008 and the last three months of 2009. The median sales price in the fourth quarter of 2009 was down 10 percent to $850,000 in the prior-year quarter. The average sales price in fourth-quarter 2009 was also down, by 12.7 percent to $1.3 million year-over-year. Meanwhile, there was a steep decline in inventory in the fourth quarter in the borough, attributed to pent-up demand, low interest rates and lower prices, according to the data book. “We saw fewer price cuts, and those price cuts were not as deep,” said Sofia Song, vice president of research at Streeteasy.  Source:  The Real Deal  Web site.  TRD
Post a Comment
Read more

Market for starter apartments heats up 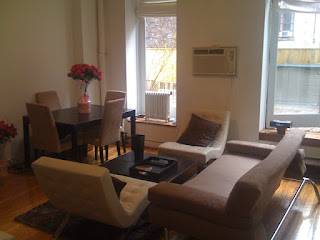 Manhattan’s lower-end home-seekers are recognizing that market conditions favor a purchase and it’s beginning to show up in the data. Citing Real Estate firms data, Crain’s reported that sales of starter apartments, defined as studios and one-bedrooms that attract price-sensitive buyers grew to account for 56.2 percent of all closed transactions in the first quarter of this year, up from a 10-year average 50.9 percent. And that growth will likely continue into the next quarter as contract signings for entry-level apartments in the first quarter rose 19 percent for studios and 11.6 percent for one-bedrooms, according to year-over-year data from Streeteasy.com. Crain’s said a confluence of factors is helping the market. Rising Manhattan rents are making purchases relatively affordable, prospective buyers are becoming confident that the market has already bottomed out and positive economic indicators are leaving buyers more comfortable with their finances. At the still-under-const
Post a Comment
Read more
More posts