Showing posts from May, 2011
Show all

House Republicans are provoking a fight with the powerful National Association of Realtors by drafting legislation that would curtail the number of loans backed by the Federal Housing Administration, the main source of mortgage money for first-time home buyers. GOP lawmakers have made scaling back government support of the housing market a key priority. However, they are encountering resistance from Realtors and many Democrats, who believe such support is essential to keep the moribund housing market from sinking further. Home buyers who take out FHA loans pay insurance premiums to the government. That money is used to pay claims to lenders when borrowers default. Currently, homeowners are able to take out FHA-backed loans with a minimum down payment of 3.5% as long as they have a relatively healthy credit score. A draft bill to be discussed at a House subcommittee hearing Wednesday would raise the minimum down payment to 5% in an effort to require the agency to make safer loan
1 comment
Read more

House Republicans have drafted controversial legislation that would raise the minimum down payment and curtail the maximum size of Federal Housing Administration-backed loans in a move that has angered the National Association of Realtors, according to the Wall Street Journal.  Homebuyers who take out FHA loans are required to pay premiums to the government. Those premiums are then used to pay out claims to lenders if a borrower should default. With a good credit score, a homeowner may currently take out a loan with a minimum down payment of 3.5 percent. If the legislation passes, the down payment would increase to 5 percent. Republicans, such as Rep. Judy Biggert, say they're trying to strike the correct balance for taxpayers and homebuyers in an effort to stabilize the agency's finances.  On Oct. 1, the maximum size of FHA-backed loans will drop to $625,500 from $729,750, without the help of the bill. With the bill, it would fall further, to 125 percent of each county's m
Post a Comment
Read more

A design revolution in New York City is taking place, as the Chelsea neighborhood transforms from a derelict wasteland to a thriving nexus of art and architecture. The Hotel Americano, the first U.S. outpost of the splashy Mexican hotel chain Grupo Habita, recently materialized on Manhattan’s West 27th Street. It’s situated between 10th and 11th Avenues, at the northern frontier of the Chelsea art district, in the middle of a block best known for its cacophonous, warehouse-scale nightclubs. Why, you might wonder, would anyone want to build a hotel here? But the unpromising appearance of the location is part of the allure. “It’s gritty,” says owner Carlos Couturier, “and I like that grittiness. It feels like what the Meatpacking District was ten years ago. Very authentic.” Yes, Way-West-27th is authentic—some of the nearest residents are in a cluster of city-owned housing projects—but here, as elsewhere in Manhattan, grit is an endangered species. Just down the block from the
14 comments
Read more 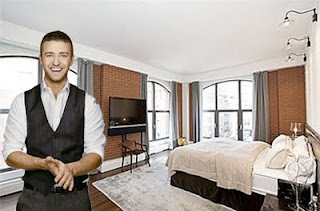 Tired of the paparazzi and part-time doorman,  Justin Timberlake  ditched Tribeca's Pearline Soap Factory for a  penthouse at Soho Mews  back in December. At the time, he hadn't yet found a buyer for the Pearline Soap pad, a  3,000-square-footer  for which he paid around $4.77 million. But now he has! According to the listing  and  StreetEasy , the apartment is in contract as of yesterday. The ask was down to $4.995 after a small PriceChop of $225,000 back in February. But the place isn't worth our tears. 414 Washington Street #5 in  Tribeca Condo Tribeca Enjoy beautiful sunsets on the river every night  from this gorgeous three bedroom, three bath  loft located in the North Tribeca Historic District.  This loft home features 11 foot ceilings and  gracious entertaining space in the oversized  living area as well as four exposures through  14 floor-to-ceiling arched windows. The open  state-of-the-art kitchen features restaurant  q
1 comment
Read more

By summer’s end, buyers and sellers in some of the country’s most upscale housing markets are slated to lose one their biggest benefactors: the deep pockets of the federal government. In this seaside community of pricey homes, the dread of yet another housing shock is already spreading. “We’re looking at more price drops, more foreclosures,” said Rick Del Pozzo, a loan broker. “This snowball that’s been rolling downhill is going to pick up some speed.” For the last three years, federal agencies have backed new mortgages as large as $729,750 in desirable neighborhoods in high-cost states like California, New York, New Jersey, Connecticut and Massachusetts. Without the government covering the risk of default, many lenders would have refused to make the loans. With the economy in free fall, Congress broadened its traditionally generous support of housing to a substantial degree. But now Democrats and Republicans agree that the taxpayer should no longer be responsible for homes valu
Post a Comment
Read more

WASHINGTON -- A set of confidential federal audits accuse the nation’s five largest mortgage companies of defrauding taxpayers in their handling of foreclosures on homes purchased with government-backed loans, four officials briefed on the findings told The Huffington Post. The five separate investigations were conducted by the Department of Housing and Urban Development’s inspector general and examined Bank of America, JPMorgan Chase, Wells Fargo, Citigroup and Ally Financial, the sources said. The audits accuse the five major lenders of violating the False Claims Act, a Civil War-era law crafted as a weapon against firms that swindle the government. The audits were completed between February and March, the sources said. The internal watchdog office at HUD referred its findings to the Department of Justice, which must now decide whether to file charges. The federal audits mark the latest fallout from the national foreclosure crisis that followed the end of a long-running housing bu
Post a Comment
Read more

Borough sees ultra-low inventory benchmark for two months straight. Average rents are up 9% for studios from year-earlier numbers, 10% for one-bedrooms, 11% for two-bedrooms. Finding a good deal on a Manhattan rental apartment will continue to get tough through the spring and summer. Rents are rising and vacancy rates are below 1% for the second consecutive month, according to a report released Wednesday. Last month, the Manhattan vacancy rate was 0.94%, significantly below the April 2010 vacancy rate of 1.23%, according to Citi Habitats, the city's largest rental residential brokerage. In March, the rate was 0.99%. Average monthly rents were up for all apartment sizes in April from the same period a year ago, with three-bedroom apartments recording the highest rise in rent, reaching $4,946 a month, up 12% from the same month a year ago. “The market is fierce right now,” said Gary Malin, president of Citi Habitats. “Tenants no longer have the luxury to negotiate rents an
Post a Comment
Read more

Tribeca's Ultimate Teardown About to Hit the Market for $45 Million 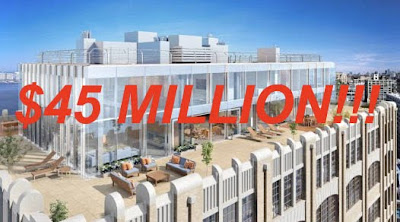 Developers of the once-troubled  Skylofts  at 145 Hudson Street got the last laugh when the two-story glass box they built atop the Art Deco building  sold  for  $30 million . That was in 2009, when the market was in free-fall, and this was actually the  second  Skylofts penthouse. The first wasn't built to Landmarks Preservation Commission-approved specifications, and  had to be torn down . In the meantime, the building couldn't get a Certificate of Occupancy, buyers couldn't close on their apartments, and rioters burned Tribeca to the ground (we might have been dreaming that last part). But that's all in the past! Now the duplex penthouse is about to hit the market again for  $45 million , the  Times  reports, which would be the most expensive Downtown apartment sale ever. The current record-holder? This penthouse! C'mon, Skylofts, stop trying to impress us. The  Times  writes that "the current owner allowed a tour on the conditio
Post a Comment
Read more
More posts