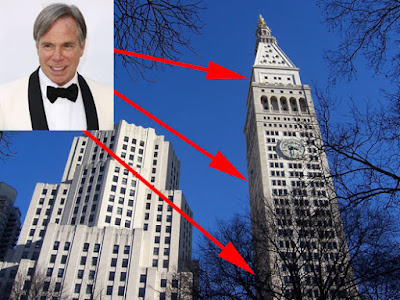 Cancel the condos! The former MetLife clocktower at 5 Madison Avenue, the grand old gal standing guard over Madison Square Park, has been sold by troubled developer Lev Leviev for $170 million. To Tommy Hilfiger. Who may turn the building into a hotel. That's what the Wall Street Journal thinks, and folks, we are reeling. The Madison Avenue jewel was purchased by Leviev's Africa-Israel for $200 million 2007, back when the diamond billionaire was buying up New York City landmarks sight unseen. Previous plans had called for turning the clocktower into an Ian Schrager hotel, but Leviev decided on 55 ultra-luxury condos. Designed byVersace. Priced at $3,500 a foot. For Russians and "top celebrities" only. Those were the days, eh?
As the global economy went bust Leviev has struggled to hang on to his holdings (he just sold the top floors of the old New York Times building), but it looked like a stripped-down condo conversion of the vacant building was back on track. And now, this. According to the Journal, Hilfiger has been trying to break into the hotel business, and his people even looked at the Hotel Chelsea, as has everyone. No one has confirmed this deal, but the sale of the building was disclosed in securities documents filed in Israel, and "people familiar with the matter" leaked the Prince of the Preppies' name. A tower on Madison Square Park, a cottage in the Meatpacking District...the guy's doing all right for himself. by Joey Arak
http://manhattanhomeinjacksonheights.com/