Showing posts from August, 2010
Show all

August 20, 2010
There were 337 single-family home sales through July, enough to outdo the first seven months of 2009 by 102 percent. Through June of this year, there were 273 sales, more than double 2009's figures, according to data from one of the Real Estate firms of Greenwich that. The Spring market is historically better. Spring seems to have come in June, with 76 home sales, versus 49 in May and 40 in April of this year. Last year, sales peaked in July, with 56 transactions. Greenwich sales figures are tracking along with 2008 numbers, with 324 sales through July of that year, but not touching the highs of 2006 and 2007, when there were 461 and 488 home sales through July, respectively. Last year there were 167 sales through July. One area where sales did not increase last month is in the $400,000 to $600,000 range. While that price range was the only one to see an increase through July of last year, this year there was a decrease of 14 percent, with 19 sales through last month versus
Post a Comment
Read more 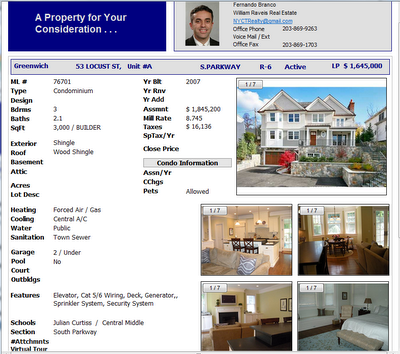