Showing posts from July, 2010
Show all

July 31, 2010
Albany – July 22, 2010 – The New York state housing market continued its strong start to 2010 as second quarter sales, helped by a record-setting June sales total, jumped more than 71 percent from the first quarter, according to preliminary single-family sales data accumulated by the New York State Association of REALTORS. The 2010 second quarter statewide median sales price grew by nearly 12 percent compared to the 2009 second quarter, despite falling by 5 percent from the first quarter of 2010. “The New York State housing market has clearly benefited from the federal homebuyer tax credit,” said Duncan R. MacKenzie, NYSAR chief executive officer. “The proof is in the 24,327 sales that closed in the 2010 second quarter and especially in the 11,230 new homeowners in June.” “The federal tax credit and historically low mortgage rates created great opportunities for buyers in the first half of 2010 and they responded,” said MacKenzie. “While we did expect the number of
Post a Comment
Read more

July 26, 2010
New York City's housing market continued its rebound in the second quarter of 2010 as the total amount of residential real estate sales increased 72 percent by dollar amount compared to the second quarter of 2009, according to a new report by ResidentialNYC.com, the public real estate listings site of Real Estate Board of New York. The value of all deals increased to $7.6 billion last quarter, up from $4.4 billion in the second quarter of 2009 ( note: correction appended ). The REBNY report also found that the average sales price for all homes citywide -- including co-ops, condos, and one-to-three family units -- increased to $728,000. Citywide, apartment sales volume increased year-over-year 65 percent. In addition, Manhattan apartment sales volume increased 82 percent, while in Brooklyn it increased 62 percent. Recent market reports from the city's major residential brokerages similarly declared that home sales volume has increased citywide, but found that pri
Post a Comment
Read more 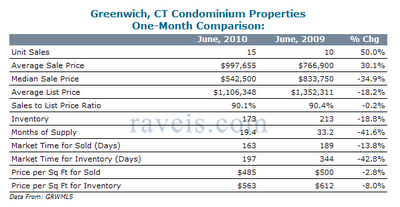