A design revolution in New York City is taking place, as the Chelsea neighborhood transforms from a derelict wasteland to a thriving nexus of art and architecture.

The Hotel Americano, the first U.S. outpost of the splashy Mexican hotel chain Grupo Habita, recently materialized on Manhattan’s West 27th Street. It’s situated between 10th and 11th Avenues, at the northern frontier of the Chelsea art district, in the middle of a block best known for its cacophonous, warehouse-scale nightclubs. Why, you might wonder, would anyone want to build a hotel here? But the unpromising appearance of the location is part of the allure. “It’s gritty,” says owner Carlos Couturier, “and I like that grittiness. It feels like what the Meatpacking District was ten years ago. Very authentic.”
Yes, Way-West-27th is authentic—some of the nearest residents are in a cluster of city-owned housing projects—but here, as elsewhere in Manhattan, grit is an endangered species. Just down the block from the hotel is the biggest driver of neighborhood transformation since Vaux and Olmsted put the final touches on Central Park 138 years ago. The first section of the High Line—a boldly designed and landscaped strip of public space atop an abandoned elevated freight railway—opened to endless acclaim in 2009; it now draws 2 million visitors a year. The second section, running between 20th and 30th streets and dotted with newly planted magnolia trees and pussy willows, is set to open this summer, around the same time as the Americano.
All you have to do is look at the buildings that have sprung up along the High Line to understand that Couturier’s hotel, a minimalist slab designed by Mexican architect Enrique Norten, is in precisely the right spot. On nearby blocks you’ll find HL23, an angular 14-story condo tower shoehorned into an impossibly small lot, which muscles its way into the airspace over the High Line; and 245 10th Avenue, a shiny heap of stainless steel that wraps around a gas station at the corner of 24th Street. At the southern end of the High Line, a new Renzo Piano–designed branch of the Whitney Museum is under construction. (The 200,000-square-foot space is scheduled to open in 2015.)
“There’s a spot around 17th Street where you can stand and see buildings by Frank Gehry, Jean Nouvel, and Shigeru Ban,” says Robert Hammond, the cofounder and executive director of Friends of the High Line, the grassroots organization that saved the railway from demolition. Actually, what you see is 21st-century Manhattan coming into focus—an intriguing mixture of old and new. 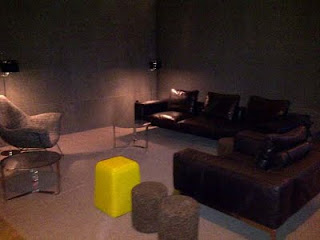 Perhaps the most impressive piece of Old New York visible from the High Line is the 1932 Starrett-Lehigh Building, on West 26th Street, a 2.3-million-square-foot behemoth renowned for its windows, eight miles of them, running like ribbons around its perimeter. Originally designed for industrial use—it has elevators massive enough to carry trucks—the building is now occupied by media, fashion, and design companies, including Martha Stewart, Hugo Boss, and Diller Scofidio & Renfro, the design firm that helped transform the High Line into a park. Couturier is betting that the Starrett-Lehigh crowd will embrace the Americano as its clubhouse, which naturally will make the hotel a mecca for designers everywhere.
From the High Line you catch glimpses of the steel mesh that covers the Hotel Americano’s façade, turning transparent or opaque depending on the angle of the sun. Behind the scrim you’ll find a hive of activity, overflowing with Couturier’s ideas about America, New York, and the nature of hotels.
Couturier and his partners started by asking themselves: “What was the best time in America?” The answer, they decided—obvious to fans of Mad Men—is the late 1950’s and early 1960’s. That would suggest yet another Midcentury Modern hotel. But Couturier then hired a Parisian interior designer, Arnaud Montigny, and the concept became: “How would a Frenchman perceive the fifties and early sixties in America?” So the furniture—vintage pieces picked up in Milan, such as the Sacco, a shiny 1960’s beanbag chair; as well as contemporary pieces, like a pouf by French designer Eric Jourdan—isn’t of the Modernist variety routinely found in boutique hotels. The confounding result is that the guest rooms look… Japanese. The style is neither American nor French nor Mexican but “urbanryokan.” A smooth wooden platform, topped with a mattress dressed to resemble a futon, occupies much of the floor space in each of the 56 tiny rooms (the smallest ones are 230 square feet; the largest, 430). A wee built-in desk is outfitted with a 1960’s-style push-button phone, an analog alarm clock by the 1970’s-era Italian designer Joe Colombo, a custom-engraved harmonica, and a bottle of the house-brand mescal. Go figure.
Even the architectural layout of the place is the product of scrambled motives. Couturier thinks the hot-spot hotels developed by his American counterparts deny their patrons “a certain intimacy.” A party atmosphere may prevent guests from getting a good night’s sleep, and they’re often denied the option of joining in the fun. Couturier recalls checking in to a downtown New York hotel: “I said I would like to go to the rooftop. ‘No, sorry. It’s closed because we have a private event.’ I’d like to go to the bar. ‘No, sorry, you have to book two weeks in advance.’ ” Americano guests, he says, will have unchallenged run of the place, from the diminutive rooftop pool (which will become a hot tub in winter) to the Latin-inflected French restaurant off the lobby and the two cozy bars in the basement.
Of course, Couturier is also a nightlife connoisseur, and he intends the Americano to be a magnet for fun. To insulate hotel guests from the din, revelers are transported to the rooftop in a glass-enclosed elevator that runs along the exterior of the building, without stopping on any of the room floors.
Couturier acknowledges that the Americano, given its location and its quirks, is not for everyone. “This hotel is more for people who know New York well. I don’t think it’s for first-timers.” He’s banking on the hotel having a certain mystique, as a “best-kept secret.” But it surely won’t be a secret to the art lovers who flock to the hundreds of nearby galleries. The Americano’s restaurants and bars—even its lobby coffee shop—will no doubt be an immediate draw, for this is the rare Manhattan neighborhood that (even now) has too few places to eat and drink. Just try to get a table at Bottino, the art world’s semi-official cafeteria, on a Thursday night, when galleries generally hold their openings. 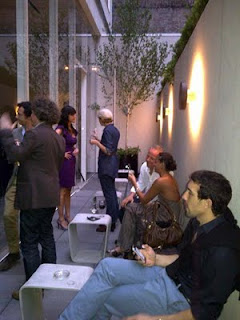 For now there are a handful of other options. Trestle on Tenth, down the block from Bottino, serves Swiss-inspired cuisine (duck with huckleberries!) with disarming cordiality. Lately an inordinate number of tapas bars have opened in northwestern Chelsea, each of them as skinny and crowded as a subway car. (Try Txikito if you actually want to sit down while snacking on pintxosand sipping zurracapote, a Basque variation on sangria.) Until more restaurants arrive, guests at the Hotel Americano might do just as well eating in. Don the soft denim yukata robe hanging in the bathroom, power up the hotel-provided iPad, and order room service. No matter what type of food you order, it will arrive in a bento box—which, in the cultural mash-up created by Couturier and his cohorts, is an obvious stand-in for that symbol of 1960’s America, the TV dinner.
Meanwhile, the neighborhood’s reinvention continues apace. A few blocks north, at 30th Street, the newest section of the High Line will end with a panoramic view of the West Side Rail Yards, where a 13-million-square-foot mixed-use development, Hudson Yards, may one day draw Manhattan’s center of gravity westward. The latest renderings of the project, slated to begin construction in 2012 or 2013, show a futuristic glass retail hub designed by German engineer Werner Sobek. The northernmost spur of the High Line—as yet unrestored—would run right through this sparkling new chunk of city.
Robert Hammond points out that people today tend to see the High Line as an extension of the West Village and the Meatpacking District. “But really,” he adds, “in twenty years, most people are going to think of the High Line as part of Hudson Yards.” And in 20 years, West 27th Street may well be an extension of midtown. The grit will be history.
By Karrie Jacobs - Travel & Leisure