Onsite: Early Look at the 9/11 Memorial and Museum 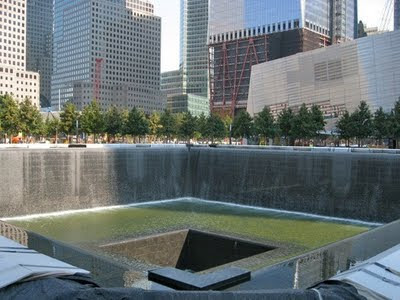 With the 10 year anniversary of September 11, 2011, less than six weeks away, we took a trip downtown to see how things are coming together at the National September 11 Memorial & Museum. Entering the WTC site from Greenwich and Liberty Streets, below the rising tower of 4 WTC where glass is going in, the scope of the rebuilding is ever apparent. From beyond the fence and along downtown sidewalks the WTC site still seems somewhat remote, but once inside the construction zone the sheer amount of glass, steel and stone is awe-inspiring. Everywhere the eye roams workers are busy lifting massive beams and raising curtain wall panels into place. The changes over the past 3 years are profound, ascan be seen in our WTC Construction Watch Special from September 2008.
Masons are laying stone pavers across the 8-acre Memorial Plaza, now planted with swamp oak trees rising 30 feet into the air, their leaves and branches offering cover from the hot summer sun. Waterfalls in the South Pool, built at "a scale that is unmatched" and moving 24,000 gallons of water per minute, cascade over 30-foot walls of granite, flowing down to a center pool where the water disappears below. At bottom an access door is tucked into the stone and shows massive hardware reminiscent of a submarine. We made our way along the parapet of the South Pool where names of those lost will be displayed in bronze. We passed through the workers and trees towards the center of the Memorial Plaza, then slipped inside theMemorial Pavilion, now nearly glassed and clad, and made our way into the Museum.
The Pavilion, set to open in 2012 and designed by Snohetta so that it "provides a sense of intimacy in an otherwise capacious urban space," gives a whole other perspective, both historically and architecturally. Once inside the gridded framework, a wide set of stairs leads up to rooms overlooking the Memorial, the arches of the Santiago Calatrava transportation hub and tower sites nearby. Descending the stairs, two steel tridents from the original twin towers stand tall. Through the gridded glass the new 1 World Trade Center tower is seen rising skyward. A ramp takes us through the interior of the museum space, between the structure of the two pools marking the original tower foundations. The exposed slurry wall, the edge of the WTC bathtub holding back the waters of the Hudson River, can be seen from an overlook where the ribbon-like pathway leads down to the Museum's main level at bedrock. There artifacts will be stark reminders of that morning ten years ago, including FDNY vehicles that were recently lowered into place, now sitting covered and silent.
Returning to the Memorial plaza above, two concrete vent structures bordering the western perimeter have been clad in steel mesh, rendering the buildings diaphanous. The Memorial Glade at the southwest corner of the site, near whereLiberty and West Streets meet, is now encircled by trees, an open space for gatherings and the perfect spot for taking in the towers rising just beyond. 4 WTC to the east is up above the 35th floor, eventually climbing to nearly 975 feet and 72 stories. 1 WTC to the north has now reached nearly 900 feet on the way to its full height of 1776 feet. From points all over NYC, this tapering tower is filling the hole we've seen in our sky for the past decade, a new monument to our city of commerce.
A full batch of shots from our 9/11 Memorial and Museum tour can be found in ourFlickr Gallery
Source: The Real Deal by Pete Davies