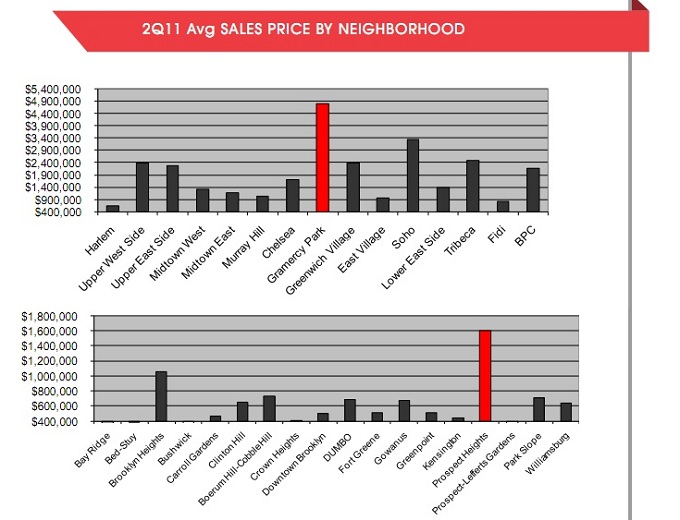 New development condominium sales are up year-over-year in both Manhattan and Brooklyn for the second quarter of 2011, according to a second-quarter new development report released today by residential real estate firm MNS. In Manhattan, condo sales prices were up 18 percent on an average compared to the second quarter of 2010, the report says.  Compared with the first quarter of 2011, the average Manhattan new development price was virtually flat. Even though some condo sales are seeing strong sales, several real estate professionals told The Real Deal earlier this spring that many challenges lie ahead. The Flatiron District saw the most positive change in the second quarter, with the closings at 15 Union Square West  and the $13 million sale of the Cupola apartment at 141 Fifth Avenue forcing the neighborhood average up over 50 percent from the first quarter of 2011. On the Lower East Side, the Karl Fischer-designed seven-unit 263 Bowery condominium brought the neighborhood quarterly average price per square foot over the $1,000 benchmark. The neighborhood had a 19 percent increase from the first three months of the year on a price per square foot basis and also had the highest concentration of two-bedroom units sold as compared to other supply within the neighborhood with 78 percent. While Greenwich Village and Chelsea condo sales were at a high point between January and March, the slow pace of closings at the Devonshire and Loft 25 brought those neighborhood averages down about 50 percent between April and June.  In May, several real estate professionals also identified other trouble spots. "Our analysis shows about 5,500 unsold new development units in Manhattan, including all of the "shadow" inventory that's not yet listed. Rae Gilson, director of sales at Classic Marketing, said at the time that the "disparity between obtaining a mortgage for a resale and a new development sale is the largest it's been in my 25 years of following the market." In Brooklyn, the average new development sales price was up 10 percent year-over-year and 7 percent quarter-over-quarter. Bushwick was up from zero new development participation in the second quarter with the addition of six closings from the Knick, and sales averaging $460 per square foot. Sales in Prospect Heights almost doubled, primarily due to Richard Meier's 114-unit On Prospect Park, the report says. The $3.3 million penthouse sale was the highest new development sale in the borough in the second quarter. Boerum-Cobble Hill saw an over 20 percent jump in sales prices over the first quarter of the year. In the Cobble Hill historic district, closings at the converted church, called Landmark at Strong Place, began, averaging over $1.5 million. In Williamsburg, closings at the Edge made up a quarter of all second-quarter of 2011 transactions in Williamsburg and boosted the neighborhood average to $710 per foot. Greenpoint had both a quarterly and an annual decline sales price of about 5 percent. In addition, the number of closings dropped by 50. Even without the final sale of the penthouses at 50 Bayard the neighborhood remains flat.


Source: The Real Deal by By Miranda Neubauer