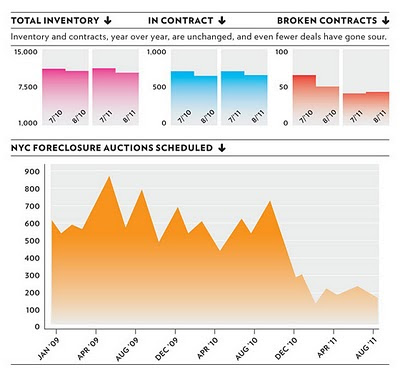 American debt has been downgraded. Has Manhattan real estate? A data-driven review.

We know the eurozone is barely hanging on, job reports are terrible, and nobody’s hiring. What we don’t know—because it typically takes a few months to become evident—is what all of this means for New York real estate. Is this a moment to buy? To sell? To panic-sell? In the weeks after the Standard & Poor’s downgrade, we asked a wide range of brokers, analysts, and executives to size things up. As you’d expect, they more or less fell into two camps—the ups and the downs—but their opinions tended to funnel down to one conclusion.


From the optimists: “In my opinion, we’ve already come off the bottom,” declares Barbara Corcoran, founder of the Corcoran Group and commentator for the T­oday show. She says newcomers are still pouring in, especially from China and Brazil, and that those wealthy buyers are indifferent to the downturn. She’s backed up by Victor Calanog, chief economist at the analytics firm Reis, who’s seeing “large transactions that seem to defy gravity.” (A penthouse just sold on First Avenue—that’s First, not Fifth—for $11.025 million.)


Noah Rosenblatt, proprietor of Urbandigs.com, relies on transaction volume as a strong indicator. He reports that the 30-day moving window of contracts signed is steady, at a little over 600. After Lehman Brothers folded, that number stayed below 500 for four months; at the peak, it topped 1,000. (Rosenblatt also monitors new listings and sees no flood of desperate sellers.)


Anecdotally, too, things have been okay. “We’re right on our numbers from last year, and last year was our second best in history” in transactions and dollar value, reports Halstead president Diane Ramirez. She agrees with Rosenblatt that listings inventory is encouraging. Right now, her internal data show about 7,200 properties available—about a seven-and-a-half-month supply. In bubble times, that figure was about three months, and in the worst days of 2008 and 2009, it was more like a year’s worth—two years’, for high-end properties. New developments aren’t crowding the market, because financing has dried up, so there’s little worry of a glut.Contracts aren’t being canceled much, either. According to StreetEasy.com (supplier of the three bar charts above), 44 went bust in Manhattan last month compared with 51 in August 2010; the number of new contracts is essentially the same, with 660 this August versus 651 in the same period last year. Foreclosures, too, are on the wane, per PropertyShark.comdata (see graph).


Finally, we checked on the banks. Jumbo lenders—those who offer the big loans needed to buy in New York—are returning to the marketplace. Several institutions that made themselves scarce two years ago have returned, says Melissa Cohn, president of the Manhattan Mortgage Company. Others are banks who’ve “never done jumbos and are doing so now.”


But buyers may have their chance too: Just because New York real estate has done well so far doesn’t mean it will hold on. Job growth has been weak, and there are a lot of rumors about Wall Street layoffs. “Long-term volatility will paralyze a lot of buyers,” predicts StreetEasy research director Sofia Song. You can see that in the popularity of rentals: StreetEasy’s traffic usually peaks in spring, says Song, but this year, for the first time, August has been the busiest month, “and that was due to the rental traffic.” Vacancies are down to one percent; rents are rising. Rental buildings are selling well, says Robert Knakal of the commercial-real-estate firm Massey Knakal, and banks are eager to finance those deals. “That might spell some diffidence for the sales market,” says Calanog.Though the Fed is keeping rates down until 2013, analyst and appraiser Jonathan Miller thinks “the benefit has played out.” If you were waiting for a low rate, you got one. Getting a mortgage is no easier, adds Calanog: “Banks are still reticent.” And though more banks are writing jumbo mortgages, the rules will change in October: Jumbos will start at $625,500 instead of the current $729,750. That means buyers who want to stay under the jumbo cap (where interest rates are lower) will have to come up with the difference—always a challenge.The consensus: Nearly everyone had the same conclusion: This is no crash. Rosenblatt says, “There’s a certain pause in the market that wasn’t there in May … but it’s nothing like post-Lehman. It’s just not.” Calanog predicts a “soft crawl upward,” with prices inching from $1,000 to $1,050 per square foot: “Because everyone is tempering their expectations, I suspect people will be surprised at how okay things will be.”

By By S.Jhoanna Robledo - The New York Times